Information from my friend in Sudan. Thank Allah for keeping him safe.

The situtation in Khartoum is getting better. On the first day (1/8) the southerners ran amuck. On the second day the northerners took charge and to some extent retaliated. On the third day the rumours went around Khartoum that another southerner leader from the "Neweer Tribe" General Paulino Matib was murdered. (Note John Garang's tribe is "Dinka"). Neweer and Dinka tribes are also used to be at war.
Some colleagues who are brave went out for lunch on the 3rd day... when they finished ordering the police came and asked them to leave, for fear of possible disturbances.
Today (the 4th day) the situation is getting better. However, we don't know about the weekend. The funeralis going to be held on Saturday, they may become emotional.
The night curfew is still on and all the shops have not opened.
Latest Update : terima hari ini (8/8/2005)
Sudan population is 34 million.(year 2004) There are about 250 tribes. 75% of these tribes are primarily Muslims/Arabs. The rest are Christians and Ethnic Religion (animist?), about 15 and 10% respectively.
Dinka (the tribe of John Garang and his successor Silva Kiir) is considered the biggest Christian tribe with about 2 million people. Nuer (the tribe of this General Paulino Matib) is the biggest animist tribe with over 1 million people. And yes the general has his own army...
Tribe rivalry is not uncommon. Cuba recall sejarah Arab sebelum Islam.. kerana kambing seekor dua tribe/kabilah boleh berperang berpuluh-puluh tahun.Bila tengok kejadian dua, tiga hari ini aku tidak heran macamana mereka boleh berperang.
Bayangkan, si John Garang ni mati pasal apa belum tahu lagi (atau almost confirm accident with no foul play), yang budak-budak ni mengamuk tak tentu hala... habiskedai dipecah, kereta dibakar, ada orang yang disembelih. Yang Arab pulak keesokan harinya balas balik... so bila nak selesai...
Ada seorang kawan yang berada di dalam ofis semasa kejadian di hari pertama (1/8), katanya macam tengok movie. Kereta sedang berjalan, mamat south ni baling batu di kiri kanan, driver lost control, hit something and the car flew and landed in the ditch. The southerners proceeded to burn the car. Somehow somebody saved the driver, but the car was history...
So imagine if the driver was you or your brother, what would you do when you see this southerner group the next day. Wouldn't you "do" something to them?
One thing will lead to another, and the next thing you find you are in a war...
Fortunately, now they are not at war in Khartoum, some 1400 people has been arrested by the police. Anyhow,kita tetap berjaga-jagalah.
Nota diatas tanpa editing yang dihantar oleh kawan. kalau ada gambar-gambar terbaru akan dimasukkan kemudian.
Email ThisBlogThis!Share to TwitterShare to FacebookShare to Pinterest Posted by mahaza at 8:06 AM 0 comments 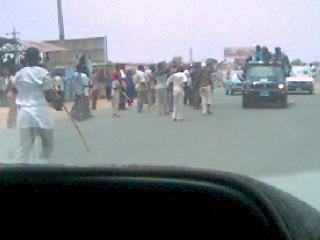 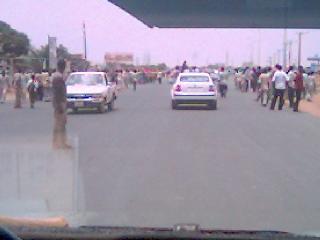 Post di bawah ini aku ambil dari e-mail dan gambar yang dihantar rakan sepersekolahan yang sedang berada di Sudan atas urusan kerja. Kepada yang tak tahu apa berlaku boleh check ini.
"Assalamualaikum,
Some experience I went thru today. I watched in the news about the death of VP John Garang, but didn't expect any problem since he died in a crash of a helicopter owned by Ugandan Army.
I was going for a meeting with one Khartoum state-owned company, on the way suddenly the van driver hit the emergency brake, and made u-turn...there were a crowd rioting on the street. The southern boys gang managed to throw some rocks at our van.
I was not that afraid, or shocked so we looked for alternative roads to the office. But somehow we were led farther and farther away from the city because the streets were full of riots. The driver took the shortcuts and kampung road to evade the rioters, but somehow we were connered.
So we parked the van behind one old contenna. Luckily one of the house owners allowed us in with the van also parked inside their compound. Minutes later I heard shootings. I could not contact anybody in Khartoum. But when I tried calling Malaysia, I managed to contact one colleague. I told him to tell people that I was safe.
One of my staff, a southerner, went outside the compound to survey the area. He was nearly shot by the police when the southerners gang was running away from the police and he accidentally joined the crowd.Luckily he was saved when one of the local allowed him in.
We were dead worried about this staff of mine. When things went quiet for a while, he emerged at the place we were hiding. I told him I was very worried about him , funnily he told me he was worried about me because he 's afraid I would go out to look for him.
The good part... the house owner treat us with lunch(they call breakfast at 11.00am), bread with foulbean, egg etc. At about 2pm we were told that the security forces had managed to control the situation and it was safe to go out.
So we came back straight to Office. People at the office were worried about me too.They were making solat hajat already... I was told a few other staff are also stuck at some of other work locations.
Have another lunch, the office ordered from hotel since nobody's allowed out yet...
Morale of the story... problem macamana pun.. soru tak miss...On the serious note.. I feel very lucky to be safe...Thanks to Allah..."
Aku harap Chalok sihat dan dapat reply e-mail kengkawan yang menanti berita.
Email ThisBlogThis!Share to TwitterShare to FacebookShare to Pinterest Posted by mahaza at 10:59 AM 0 comments